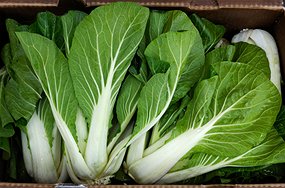 Monday, 4 March 2013 Bianca Nogrady, ABC
Proteins in leafy greens could be part of some signaling pathway that is used by a gene to produce immune cells that regulate good and bad bacteria

The study has discovered a gene known as T-bet is responsible for production of a type of cell that helps repair the lining of the gut and maintain the balance of good and bad gut bacteria.

The results are reported today in Nature Immunology .

"There's a group of immune cells that essentially regulate the good and the bad bacteria and it's not been known how the body makes those cells," says lead author Associate Professor Gabrielle Belz, from the Walter and Eliza Hall Institute.

"We've been looking at one of those genes that is responsible for one of those cell types actually being generated and collectively protecting the gut from infections and bad bacteria."

Genetically-engineered mice with this particular gene 'knocked out' are much more susceptible to gut infections, she says.

The cells, called innate lymphoid cells (ILC), come in many different forms and serve a range of functions throughout the body. However in this case, the researchers focused on a particular type of innate lymphoid cell that produces a immune signalling protein called interleukin 22 (IL-22).

"IL22 is protective so it helps repair the epithelium [the cells lining the gut] and if the epithelium is intact then you tend not to get problems with differentiation that lead to cancer," says Belz.

"Whereas if those cells don't exist, it has been shown recently that it could lead to the development of cancer in a mouse model."
Greens and genes

Green leafy vegetables such as bok choi and broccoli contain a compound already known to indirectly trigger a receptor on the surface of innate lymphocytes. This new research suggests this compound could play a role in development and function of these cells.

"Proteins in these leafy greens could be part of some signaling pathway that is used by T-bet to produce ILCs," says Belz.

Understanding how these important gut immune cells are produced and what affects their production could help researchers to understand what happens when this system breaks down.

While the study was conducted in mice, it could have implications for human diseases that affect the gut, such as Crohn's disease, and even conditions such as obesity.

"It has been shown that the microbiome of the gut influences the ability to use nutrients properly and therefore obesity - at the moment there's an interesting network of links to the intestinal health of an animal, as regulated by these different cells types," Belz says.

"So people are starting to look at whether exactly the same sorts of arrangements are occurring in humans because potentially they could be a target of treatments."

Tweet
Published in Health blog
More in this category: « Being Fit Can Protect Against Developing, Dying of Cancer Recipe for homemade crispbread »
back to top